The Formula Supercar series was literally born and bred at Killarney. 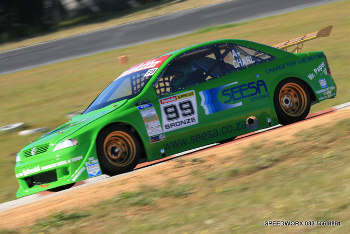 Starting in 1995, Owen Ashley, the doyen of innovative South African race car designers, designed and built this entire one-make series in the Owen Ashley Auto Developments workshop, situated literally metres from the back straight at Killarney.

Owen’s brilliant design comprises a tubular space frame chassis fitted with fully adjustable race suspension and powered by a 2L Opel 8-valve “Boss” engine. The entire package is covered by a fiberglass body shell in the shape of an Opel Astra.

The result is a lightweight rear-wheel drive racecar that can set blistering lap times, yet still be affordable enough to be raced at club level. The key to this affordability is the strictly controlled series regulations, which prohibit modifications to the cars in any way. This helps to keep the costs down and makes for equal racing. All replacement parts, as well as tyres and fuel are specified and controlled. Power output, which is limited to a maximum of 133 kW and 218 Nm, is measured by means of dyno testing before and after race meetings.

The concept of identical cars, where driver performance can shine through and cheque books cannot affect the results, took off, and Supercars quickly became the premier Western Cape Regional formula. During its formative races, the notion of putting the slowest at the front and the quickest at the back of the grid resulted in accidents so wild that they were constantly repeated on national television. In total twenty five Supercars were built, with an average of eighteen of these being raced regularly at Killarney. These purpose-built racecars have provided some of the closest and most spectacular racing at Killarney over the last twelve years.

Three classes, Gold, Silver and Bronze, currently form the basis of the championship, with the winner of the Gold class being pronounced the overall champion. Classification is based on average grid position. The Supercar championship consists of ten race meetings held over the year. Nine of these races take place at Killarney, where the formula is based, with one away race in the second half of the season.

Away race tracks currently used are the Mercedes Benz GP circuit at East London and the Aldo Scribante circuit in Port Elizabeth. A race meeting will typically consist of Friday afternoon unofficial practice, where cars are set up and fine tuned for race day. Saturday early morning is used for a 15 minute qualifying period for grid positions for the first race; two 8-lap races complete the day, with grid positions for the second heat determined by results of the first. During all these events the pits are open to all members of the public, giving everyone firsthand experience of the process of racing.

Due to their spectacular and often eventful racing, sponsors have always supported Supercars: Gearmax in 1997 was followed by Spirit, Unysen and Warwick, while Makita Power Tools, who had been sponsoring Wally Dolinschek since 1997, joined Warwick in 2004 as main co-sponsors. 2005 saw Glopin as series sponsors, followed again in 2006 by Makita Power Tools, who have gone on to sponsor the series in the 2007, 2008, 2009 and 2010 seasons, an incredible five consecutive years, and a total of 13 years involvement with Supercars, making them the longest standing series sponsor in the history of the formula.

Interestingly, the formula attracts mainly self employed business people, but also serves as a proving ground for young up and coming racers, some from karting, others from oval track racing. Driver ages range from 15 to 59, all avid racers at heart.

All Supercar drivers past and present know that they are a part of a tradition of hard and close racing, where no quarter is asked nor given. This has forged many friendships and produced some interesting and colourful stories over the years, many of which can be heard in the Supercar bar long after the raceday has ended.